My sister loves small spoons. Not a teaspoon versus a tablespoon, but spoons that take dainty and genteel to the extreme. Spoons that require a different grip than a full sized one. Spoons that can only scoop up a small taste of something, usually sweet, soft, airy, creamy and certainly so decadent and precious that they must be savored. A small spoon is a great way to savor this dessert. I’m sure tiny utensils could be used for meals other than dessert. Eating something that is so flavorful that it tickles and tantalizes the taste buds and tongue makes me want to fully enjoy and appreciate each bite. I could use a miniature fork and nibble at it, but usually I am able to slow down and take in the flavors and textures.

Dessert, on the other hand, can be greatly enhanced with dainty silverware. I wouldn’t eat a slice of apple pie with a small spoon, or a berry crisp, or even an ice cream sundae. But desserts that are delicate and rich are better licked up in little quantities, delivered by something that is disporportionate to the amazing taste. I do have to agree with Carrie, that the right utensil does enhance the experience.

When it comes down to it, though, the utensil isn’t crucial. Its the dessert that really matters. This was certainly the case yesterday when a certain cupid related holiday enticed me to make something involving lots and lots of chocolate. 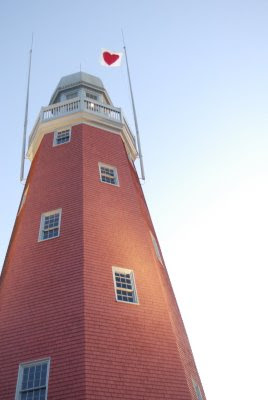 I had wanted to make something deep and dark all week, but didn’t really get time until yesterday afternoon when I got home from work after strolling through the city which was, according to yearly tradition, plastered with hearts. I thought I might make a flourless chocolate cake or something molten, but time and energy was waning and remembered a recipe for chocolate mousse that I had been saving since last year. 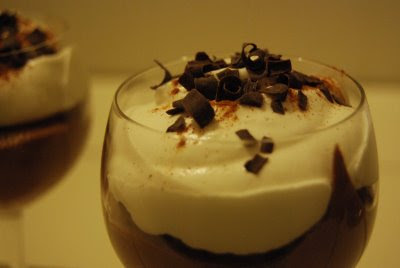 I found this recipe in a sample issue of Cook’s Illustrated and it is the product of one of their amazing quests to find the perfect chocolate mousse. It was an excellent dessert — light yet chocolatey and satisfying. I enjoyed it with nearly equal amounts of lightly sweetened whipped cream, a dash of cinnamon and a few sprinkles of grated chocolate. Even though my silverware drawer lacks the tiny perfect utensil to eat it with, it was still the perfect dessert to savor slowly. And now that its gone, I’ve forgotten the spoon but I’m still thinking about the mousse.

I made this recipe relying on what I had on hand. I did not have the instant espresso powder so I added a bit more cocoa powder. I also didn’t have any brandy (I added two more teaspoons of water and a teaspoon of vanilla), but the dilligent and exacting recipe creators and testers at Cook’s Illustrated said that it enhanced the flavor without being too strong — either way it should work fine. This recipe makes about 3 1/2 cups, certainly enough for 6-8 people. I cut the recipe in half and it made four ample servings.

2. Whisk egg yolks 1 1/2 teaspoons of the sugar and salt in a medium bowl until the mixture lightens in color and thickens slightly. Pour melted chocolate into egg mixture and whisk until combined. Let cool until just warmer than room temperature.

3. Beat the egg whites on medium-low speed until frothy. Add remaining sugar, increase speed to medium-high and beat until soft peaks form. Whisk the last few strokes by hand, making sure to scrape up any unbeaten whites from the bottom of the bowl. Stir about one quarter of the whites into the chocolate mixture. Gently fold in the remaining whites until a few white streaks remain.

4. Whip heavy cream until it forms soft peaks. Fold the whipped cream into the mousse until no white streaks remain. Spoon into serving dishes. Cover and refridgerate until set and firm, at least two hours or up to 24. Serve with whipped cream and any other garnishes you like.