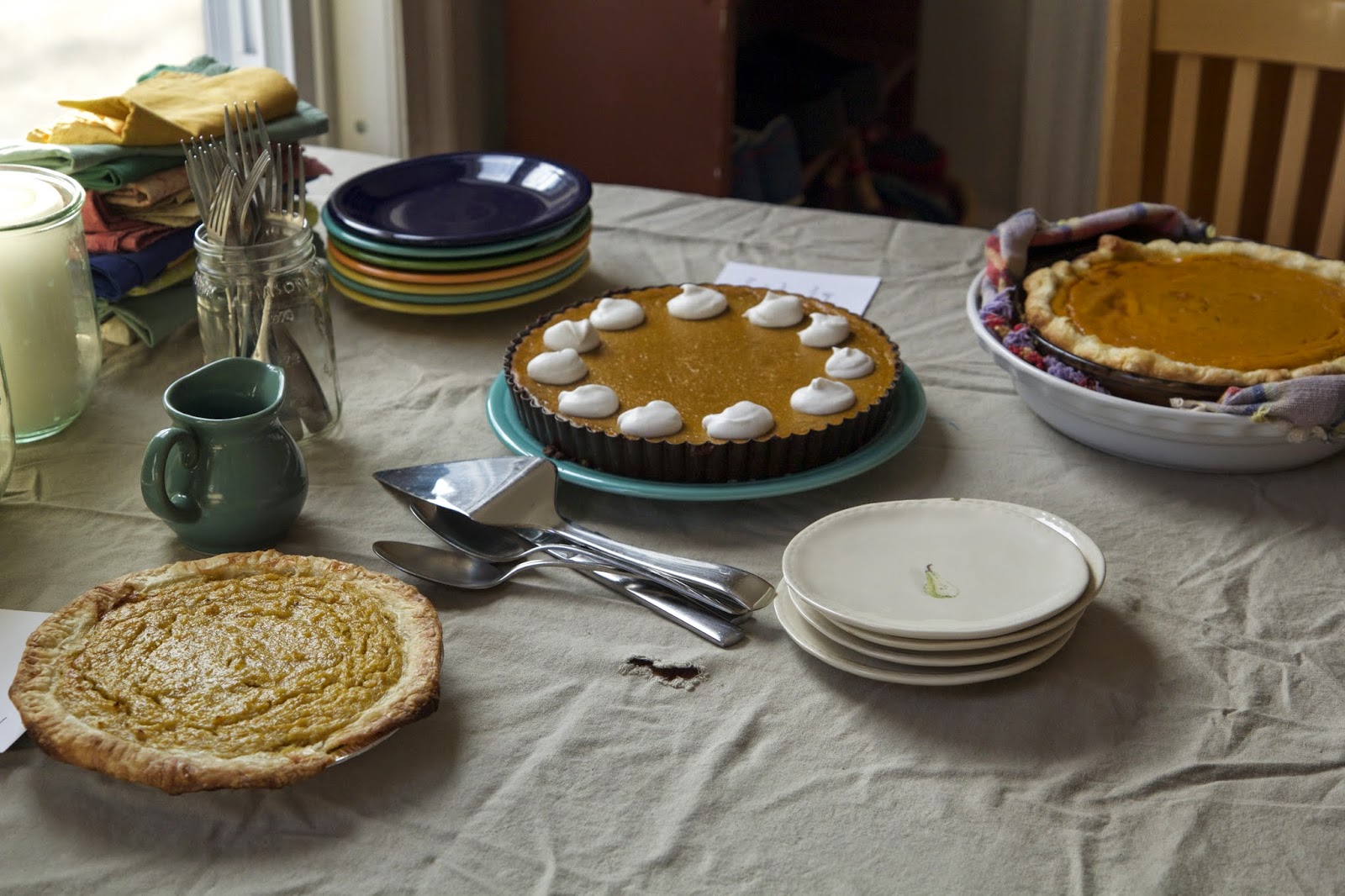 There’s been a lot of pie on this blog over the years. I probably share them here as often as I make them which is usually once in the summer and again around Thanksgiving. Over the weekend, we held our fourth annual pie contest. Usually there are two pies in the competition, one by Ray and one by me. This year we decided that eating lots of pie a few days before Thanksgiving sounded like a great idea, so we invited friends and family to join us in baking, eating, and judging.

We ended up with seven pies and ten adults. There were pumpkin pies, apple crumble, key lime, and both chocolate and banana cream. Everyone voted for their favorites in best crust, best filling, best non-traditional, and best over all. The competition was close and I am sure that every pie got at least a few votes. After announcing the winners for each category, it was clear that with so many pies and such full bellies we all won. 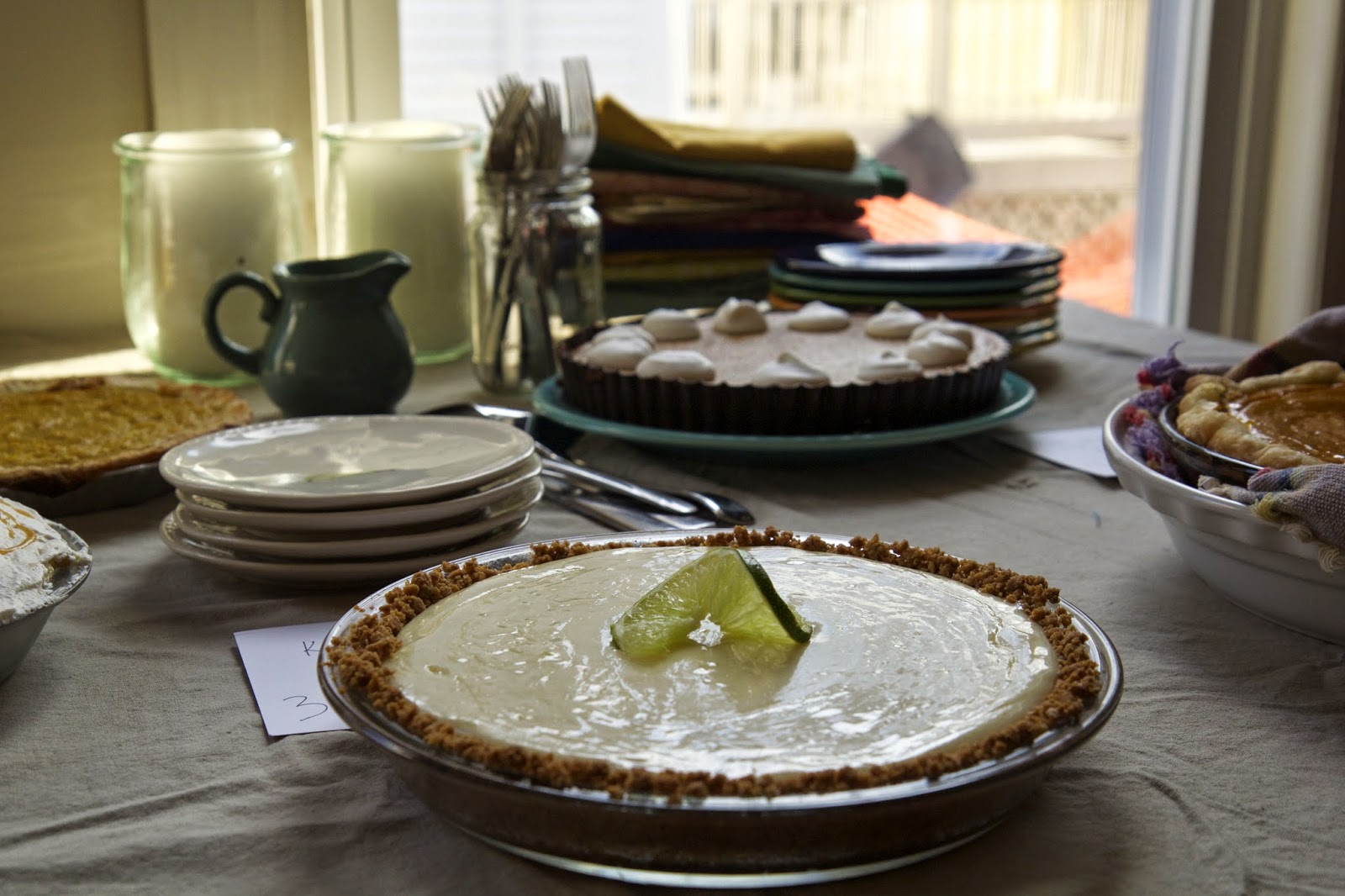 I will say that the recipe I am about to share did not win best overall but it tied for best crust and best non-traditional. After working at a bakery over two Thanksgiving seasons, I am really comfortable making a classic butter crust, so I decided to go out on a limb and dreamed up the chai spiced pumpkin pie with chocolate crust and coconut cream. I wanted to make the pie gluten and dairy free but I wasn’t sure if I could make it from an idea to a finished pie. The number one rule of our pie contest was that no disclaimers or other discussion of your pie were allowed before judging happened. You know, Julia Child’s rule that you never apologize if your food doesn’t turn out well? It is so tempting to explain what went wrong before sharing something that you make, though usually no one else notices. We all, mostly, held our tongues about the possible short-comings of our creations and instead filled our mouths with pie. 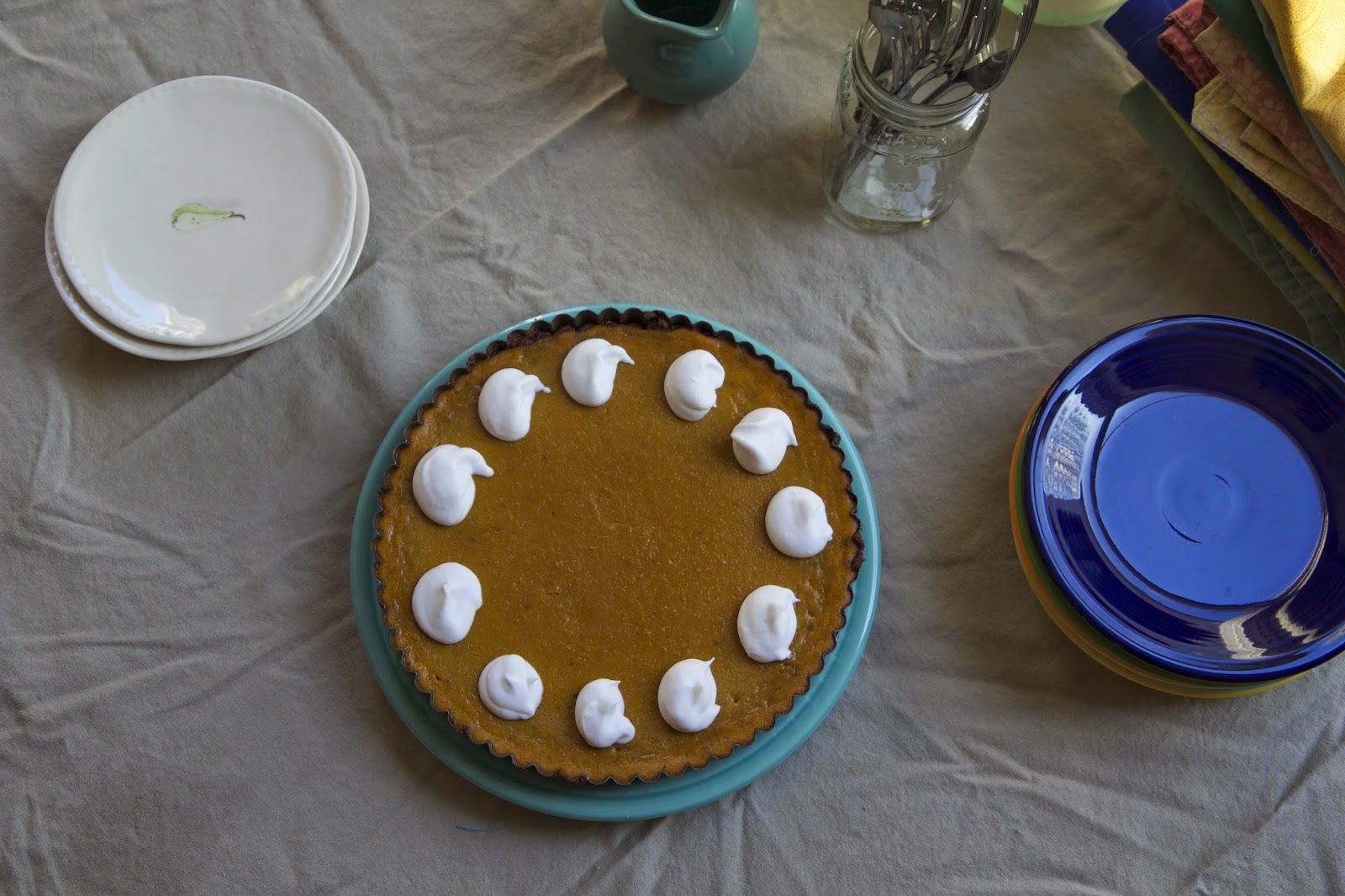 This pie is gluten and dairy free (not vegan because it uses eggs). I adapted the crust from this recipe, substituting coconut oil for butter and almond flour for flour. I was inspired to try the spices in this filling recipe, but I used coconut milk instead of creme fraiche or cream. This recipe could be made with regular flour, butter, and milk but it was fun to make something a little different that some our friends who couldn’t eat gluten or dairy would also enjoy. Either way you make it, you will have a dense chocolatey crust and a thick, creamy filling.

Lightly grease a 9 inch tart pan with coconut oil. Combine the flour, sugar, cocoa, salt and spices. Add coconut oil and beat with a mixer on medium speed until the coconut oil is mostly incorporated. Add the egg and beat until it forms a soft dough. Refrigerate for 20 minutes (for easier pressing) or press the dough into a tart pan without refrigerating. Make sure the dough is pressed evenly on the bottom and sides of the pan. Prick the tart dough on the bottom in a few places with a fork. Place a piece of parchment paper over the tart pan and fill the inside of the tart with dry beans, uncooked rice, or pie weights. Bake for 10 minutes. Remove the parchment and weights and bake for another 3-5 minutes until the crust seems mostly dry. Once the crust is out of the oven, sprinkle the chocolate chips over the bottom of the tart crust. Let them sit for a few minutes and then spread the melted chocolate evenly over the bottom of the tart. Set aside to cool.

While the tart crust is baking or cooling, make the filling.

If you are using canned pumpkin you can skip the step of cooking the pumpkin and just combine the ingredients in a bowl. If you are using baked pumpkin (not from a can) then combine it with the coconut milk, cornstarch, spices, sugars, maple syrup, and salt in a sauce pan. Stir over medium heat until the pumpkin is shiny and slightly thicker about 5-7 minutes. Remove from heat, scrape into a bowl, and let cool for 5 minutes. Add the three eggs to the pumpkin and whisk until everything is completely smooth and combined.

Pour the pumpkin into the cooled tart shell and bake for 30 minutes or until the pie is set in the middle. Let it cool for several hours and refrigerate overnight if you are not serving it until the next day. Garnish with coconut cream.

Carefully open the can of coconut milk and scoop out the thick coconut milk into a bowl or the bowl of a stand mixer. Add the sugar and beat on medium high until the coconut milk has thickened to a whipped cream consistency.