Dessert for a Friend

Its a curious thing, how so much time and space can come between friends, but, when reunited, its as though there had been no distance at all. My friend Jamie was visiting last week from Thailand, which has been her home for the past year. We’ve known each other for years, starting in high school, then ended up in the same place for college and have seen each other pretty regularly since then. But now we are mostly connected by the shouting back and forth of email and sometimes a letter or postcard. So much gets lots between those exchanges as life goes on in small ways and big: things have changed for each of us. It seemed like a year of not seeing each other would make it hard to reconnect, but then there we were and it was so normal that I hardly knew what questions to ask her about her time away.

I just always marvel at how everything that has happened since you last saw each other doesn’t really matter when you reconnect with someone. It means more stories of adventures and challenges and less time, maybe, to talk about the books you’ve been reading or other small things. The great thing about an old friend is that there is no pretense, no need to impress, just the delight in each other’s company.
When Jamie called me and we made plans to have dinner the following night, I immediately thought: I should bake a cake! I should make a really fabulous special dinner. But it was eight-thirty at night, I was tired, and I had to work all day the next day. My elaborate quickly faded. The next day, after a walk, and some tea, I suggested to Jamie that I could make risotto (which I don’t think she found in Thailand). As the rice bubbled away, I was still racking my brains for some sort of celebratory dessert. I began shuffling through cookbooks to see if there was anything I could make with what I had on hand. I don’t remember how I came upon the chocolate pudding cake, but it sounded good and it seemed ridiculously easy to throw together.

Its actually a version of something my mom used to make, called Denver Chocolate Pudding. I think I would call it Chocolate Lava Cake or Chocolate Swamp Cake. The point is that, while its not pretty, it can be made in just a few minutes and bubble away in the oven while you eat dinner and listed to stories from far away lands. It’s sort of a step down from all of the incredibly rich dark chocolatey desserts which certainly have their place, but its perfect for a Monday night dinner with a good friend. 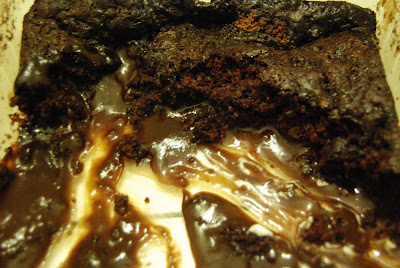 Adapted from Moosewood Restaurant Celebrates
It may look slightly scary, but its a wonderful combination of spongy cake and gooey pudding. Be sure to admire the molten chocolate lava that comes bubbling up from the cake when it is ready. I would let it cool quite a bit before tasting, to prevent burnt tongues but also because it will have a more pudding-like consistency. You could use soy milk instead of milk and it probably wouldn’t be hard to substitute a gluten-free flour mix. On the other hand, I think it is best served with lots of whipped cream. To make it more chocolatey, increase the amount of cocoa slightly or use hot coffee instead of boiling water.
1 cup granulated sugar
1/2 cup unsweetened cocoa powder
1 cup flour
2 teaspoons baking powder
1/2 teaspoon baking soda
1/4 teaspoon salt
1/2 cup milk (or soy milk)
1/4 cup vegetable oil
1 teaspoon pure vanilla extract
1/2 cup brown sugar, packed
1 1/2 cups boiling water
Preheat the oven to 350 degrees. Oil a 9×13 inch glass baking pan
In a mixing bowl combine 3/4 cup of granulated sugar, 1/4 cup of the cocoa with the flour, baking powder, baking soda and salt. Stir in the milk, oil and vanilla and beat well to form a thick batter. Spread this batter into the prepared pan.
In a separate bowl, mix together brown sugar with the remaining granulated sugar and cocoa. Sprinkle the mixture evenly over the top of the batter in the pan. Pout boiling water over the whole thing.
Bake until the cake is set around the sides and the top is loose and bubbling, 20 to 25 minutes. Cool for at least 15 minutes before serving.
Serves 4-6