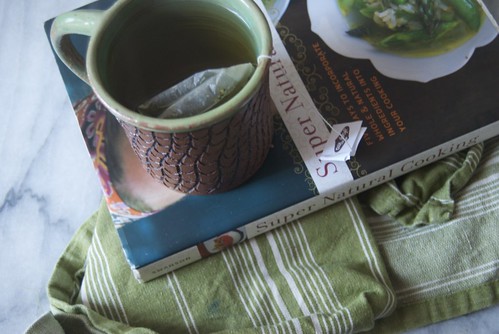 The year is waning, the days are shorter and certainly colder.  This time of year, there is so much going on.  Maybe there are leftovers to be eaten, or new meals and celebrations to plan.  Whatever holidays you celebrate there is probably at least one between the end of November and the beginning of January.  This time of year is full of celebrations and traditions for many, and for many it is also a hectic time of stress.  For me, each month seems to pass by in a row of days, like cars of a train that never slow or stop.  As cliche as it is, I am always surprised when a new month has arrived so quickly.  Although it has just begun, December’s days will be as fleeting as the sunlight which passes through my kitchen window each morning.

This year, I am very much looking forward to the traditions and celebrations that come with the winter solstice, Christmas, and the start of a new year.  Although I don’t have a lot of my own traditions yet, I am looking forward to the making and baking that have become some of my yearly December rituals. As I puttered around my apartment the other morning, I realized how much I want to sink into each day and observe what is there.  Its so difficult to do, in the midst of everything, but it seems so important, especially in this time of year which is so exciting and yet passes at the breakneck speed of a sled on an icy hill.

So, here I am, trying to pull out a part of each day and hold onto it.  As I try to observe what is around me — in the air, the sky, the oven, a conversation with a good friend, the lights that twinkle, and the windows lit from within — I hope to share a little bit of the end of the year and the progression of this holiday season.   Every time of year escapes too quickly from my grasp, but it is in this one, late fall early winter, that I have chosen to try to share some of the light, the creations, the tastes, the smells with you here.  I’ll be here as often as I can in the next few weeks to record some of these moments and days.

P.S. If you are wondering about the cookbook in the picture, on which I have carelessly rested my cup of tea, its a great one by Heidi Swanson.  Supernatural Cooking is full of vibrant pictures and equally bright, creative and nutritious recipes.  I just made the sweet potato spoon bread, which was soft and savory with a hint of sweetness.  I also love her recipe for thin mint cookies.  Heidi Swanson has a lot more great recipes in her book and at her website 101 Cookbooks.