Returning to a New Year. 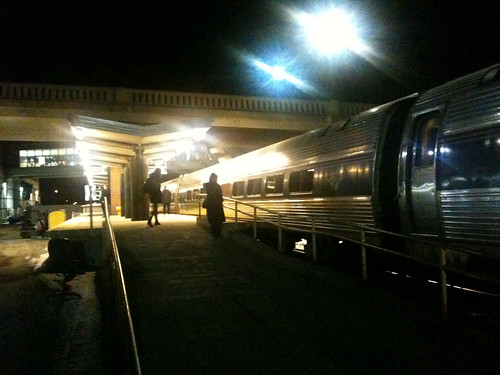 Have you ever had one of those dreams where you have to be somewhere important and you are continually side tracked, distracted, and delayed from reaching the place you need to get to?  During our two weeks of traveling and visiting as many friends and family members as we could fit in each day, I occasionally thought of these dreams. While sleeping, these visions are confusing, disorienting and frustrating but when I am awake, I realize that not taking the exact route or schedule that you thought you would is just part of life.

On the day we had originally planned to reach Ray’s parent’s house in New Jersey, we found ourselves in Portland enjoying a delicious dinner with dear friends. When we thought we were flying back to Minnesota, we instead boarded a train to Chicago, then another train, and got home more than a day later (although train travel is slow, it is roomier and more relaxed than any other long distance motorized transport I have experienced). I’m not always the greatest at going with it when plans change, but sometimes better things come than what I had expected.

The travel and vacation gave me lots of time to read and also to think about goals and plans for 2011. Clearly making plans and setting goals doesn’t mean I will end up exactly where I think I will, but I do like the end of one year and the beginning of another as a chance to reflect and find a fresh start going forward. Of course I have at least 20 things I want to do better or do more of, but I’ve written down a few goals that I hope to really focus on. In the next few days I’ll be getting organized, started on new things, and back to my sewing machine. I’ll see you next week!

*This photo was taken by Ray at a stopover in Albany, NY. Thanks for letting me post it here, dear!