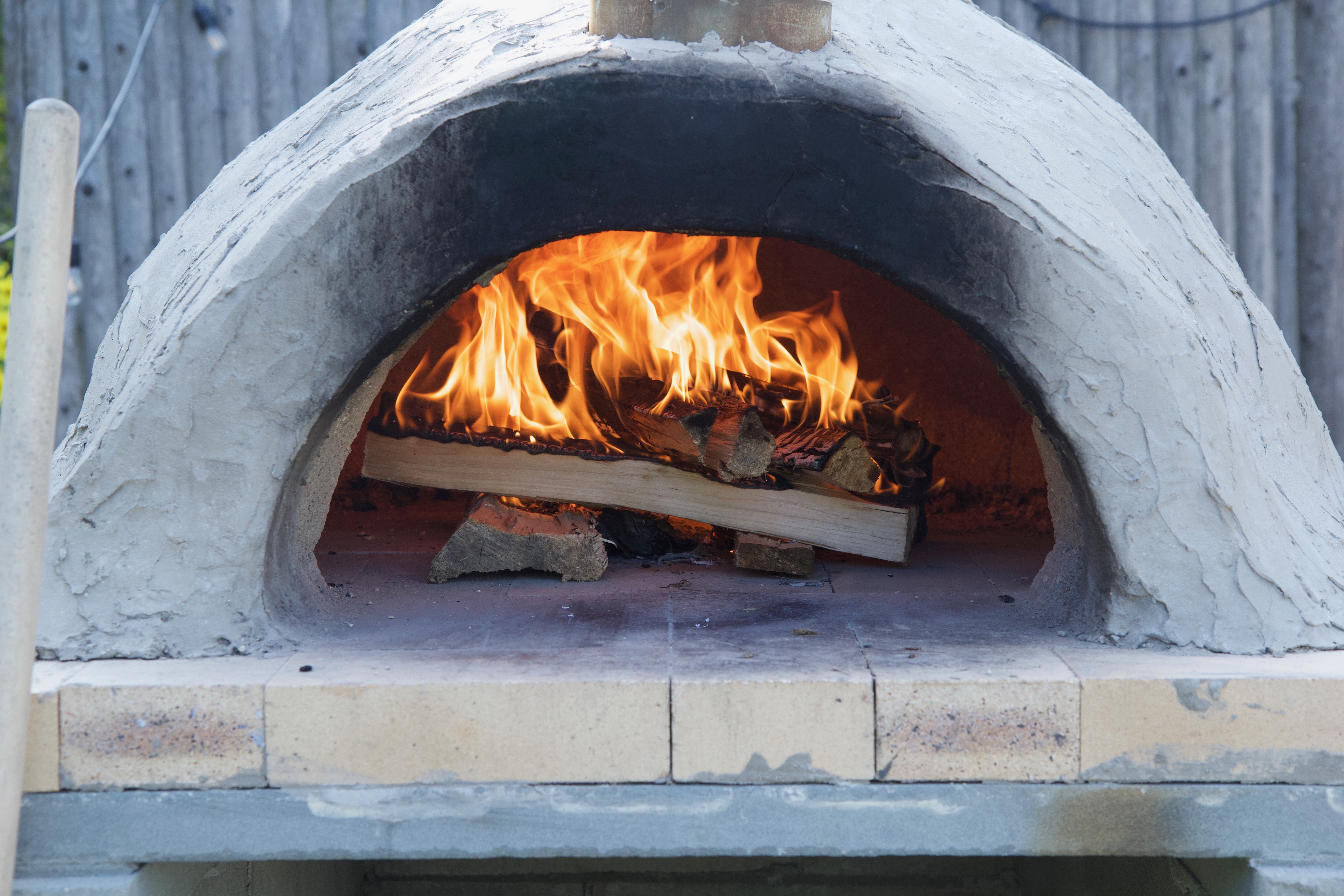 We built a pizza oven! It has long been a dream to have an outdoor oven of our own, but we spent a lot more time dreaming than actually planning and researching. This imbalance was, mostly, righted by a willingness to work hard to make it happen, flexibility with plans, and spending more than we really wanted to. Although we have a bit of experience with cob, building with cement was a more practical option for our outdoor space and made it a little easier to find the materials we needed. We were also tight on time since we hoped to finish the oven before hosting about 30 people for a tenth anniversary party, with wood-fired pizza, of course. So, we chose what seemed like it would be the easiest way to build the oven. It’s far from perfect, but it makes great pizza.

I’d be very happy to share information about our process and materials if anyone is looking for more specifics, but a basic overview of the building process is as follows. Ray built a simple frame to construct the oven, with a giant exercise ball as our dome shape, instead of the more traditional pile of sand. I mixed vermiculite and refractory cement to build the dome and spent a few soothing hours molding the material around the exercise ball. Once it had dried I added a layer of insulation and covered it with chicken wire and more refractory cement. We made the simplest base we could, with stacked cinder blocks, and regretted not moving the oven before all of that heavy cement was on top. We came close to dropping it in the process, but we were able to slide the oven on the base, seal it up, cure it, and, a few weeks later, had our first pizza night.

It has only been a couple of months using the oven so I hope and expect that we will hone the process and become much better over time. To make pizza in the oven, I usually build a fire one and half to two hours before we plan to bake pizza. Maybe a longer fire would yield a crispier crust or more heat for baking other things after the pizza is done. When the oven is hot enough, I push the glowing coals over to one side and add other piece of wood for some flame to cook the top of the pizza. I stretch the liberally floured dough until it is roundish and very thin. After draping the dough over the metal peel, I add toppings and slide it in the oven. Sometimes it sticks, or stretches into another odd shape, but usually it slips off satisfactorily. It only takes a few minutes for the flabby dough to rise and bubble and crisp, I turn it once or twice and it is ready to cut and eat. Let it cool a few minutes if you don’t want to sear off the roof of your mouth.

After pizza, I like to slide a cast iron pan into the oven, filled with fruit and a crumbly topping or packed with cookie dough. I’ve also baked pita bread and we made a batch of bagels. The oven doesn’t have enough thermal mass hold heat for long, but I hope to build a door so I can try baking bread and further experiment with what the oven can do.

For me, the bottom line of building this oven is that we built something ourselves. And it works. It can certainly be done more cheaply than we did (what we lack in skill and energy we often end up paying for). A backyard oven is absolutely not a necessity but it is a practical and fun luxury, if you enjoy making your own pizza in an 800 degree oven or if you just enjoy eating good pizza. From a dome I constructed myself, I can bake and cook food that I’ve mixed, kneaded, and stretched.